1. Using the 8-32 bolt and nut, attach the control arm to the manual lever as shown in the illustration.  Snug the nut, but do not tighten.

2. Remove the original bi-metallic coil or primary air control from the back of the stove.  The high/low plate is used only on the Harvest stoves that will have two threaded holes in the top.  If you are attaching the control to either the H-I or H-II, discard the high / low plate.

3. Insert the inconnell spring into the hole in the stove (the hole nearest the flue collar on the Harvest).
4. While holding the control arm outward (toward the side door), screw the manual lever into the hole where you have just inserted the ball bearing.  The control arm should be loose enough to allow you to turn the lever into the top until it has some tension against the ball bearing and spring.  Position it so that the lever is straight up and the control arm is to the right.  Tighten the 8-32 nut.

5. On the Harvest models only, install the high / low plate in the hole beside the installed lever.  Secure it with the ¼” bolt.

7. Rotate the lever to open or close the primary air cover.  Refer to the owner’s manual for the proper operation of the air intake 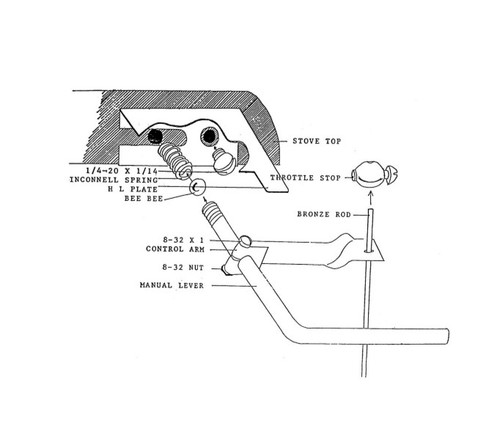