Does NOT include  HearthStone Wood Handle 90-71100

1. Remove the old door latch assembly by loosening the two setscrews located in the chrome crank with the hex wrench. When loose, pull apart and remove the outer and inner portions of the latch from the stove. Remove the bolt and wooden handle with a flat tip screwdriver and save these to be installed on the new latch assembly. You can discard all other original latch pieces.

2. Install the new latch assembly as shown in the illustration. Begin with two shim spacers placed on the latch shaft. Push the threaded end of the latch shaft through the door so the threads are on the outside of the door.

5. Install the bolt and wooden handle removed in step one.

6. Check door seals using the "dollar bill test." Shut the door on a dollar bill in various locations. If the bill pulls out without any resistance, then your stove’s door isn't sealed properly. Add or remove spacers from the inside of the latch to adjust gasket pressure. Remove a spacer to draw the door in tighter. 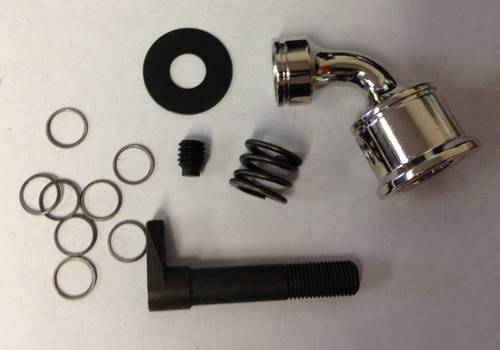