This is a OEM Travis Industries Replacement Part : This Part is only for the model(s) listed above and will not fit any other models of stoves. Travis (Avalon/Lopi)  has made many different models of pellet stoves over the years and most of them have unique parts that only fit that particular model of stove.

INSTALLATION INSTRUCTIONS
NOTE: Due to the high voltage of the pellet ignition system, it must be installed by a certified Travis Industries dealer. Make sure the heater is unplugged (it is easiest to install the igniter before installing the pellet burning appliance)
1. For pellet inserts the internal left side is already exposed, go to step 2. For freestanding pellet stoves, the left side panel will need to be opened. First unscrew the air control knob. Then take a standard screwdriver and turn the panel fasteners one-quarter turn. These fasteners hold the panel in place, and only need to be turned slightly to release. Then swing the panel back on the hinge. To re-attach, turn the fasteners one-quarter turn while pressing them against their sockets.
2. Disconnect the two plugs to the control box. Use a 7/16" wrench or socket driver to remove the nut that holds the clamp against the convection blower (some models use a bolt). Rotate the convection blower towards the rear and remove
3. The igniter is installed behind the outside air tube into the firebox back. Find the coupling nut located behind the outside air tube (see the illustration below). This nut holds a plate used to seal the igniter hole. Use a 3/8" nutdriver or wrench to remove the coupling nut and washer that holds the plate in place. Then slide the plate out and discard (it may require some rocking back and forth to remove). Carefully remove and discard the plastic tubing from the igniter assembly that protects the wiring. Insert the tube on the igniter assembly into the hole where the plate was located (it may require some rocking back and forth while inserting), making sure to line up the threaded stud with the hole in the igniter assembly. Replace the washer and coupling nut removed earlier and tighten it against the igniter assembly.
4. Locate the brown and white wires with the tag that reads "Optional Igniter Electrical Connections" attached to them (they are near the convection snap disk). Cut the nylon wire tie holding these wires. Connect these two wires to the two leads coming off the igniter assembly by attaching the quick-connects. The orientation of these two wires does not matter. Then use the included nylon wire tie to remove any slack from the igniter assembly wires (this is to prevent the wires from coming in contact with the convection blower).
5. Insert the convection blower into its holder and push it towards the center of the stove as far as it will go. The gasketing must pinch tightly into the holder so some force may be needed to get a good fit. Replace the nut (or bolt) that was removed in step 2. Re-attach the two plugs removed from the control box. Secure the side panel on the freestanding pellet stoves by following the instructions in step 1. The installation is now complete. 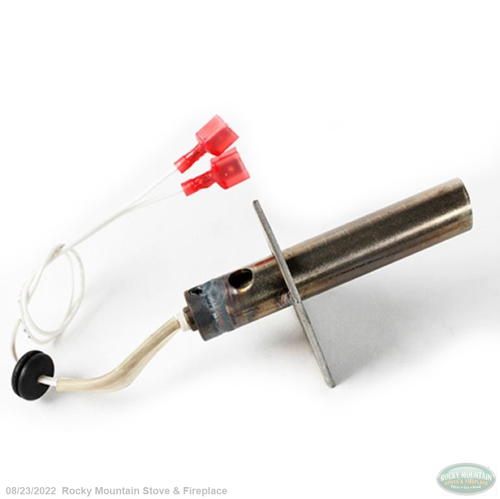