Jotul ProFlame 2 Replacement Remote Transmitter #157495:  The remote transmitter has all controls available on its face for reliable, ease of use. It gives room temperature readout, set temperature readout, all function abilities as well as childproof lockout and low battery indicator. Icons appear on the screen indicating which mode of operation you are controlling. The four button controls are easy to learn and simple to operate. The transmitter is powered by three (3), 1.5V AAA batteries.

1. Press the Controls Access Door to release its magnetic catch and swing the panel down. Switch the Mode to REMOTE.

3. Press the PRG button on the Left front corner of the switch plate. The board will “beep” three times and a yellow LED will indicate a 10-second synchronization time limit.

4. Within 10-seconds, press the Tramsmitter ON button. The IFC will “beep” three or four times to indicate that it has acknowledged the transmitter command and sets to the particular code of that Transmitter.

5. After initialization, place the Mode switch in the REMOTE position. The hand-held transmitter can then be used to control the burner.

For use with the below Jotul units: 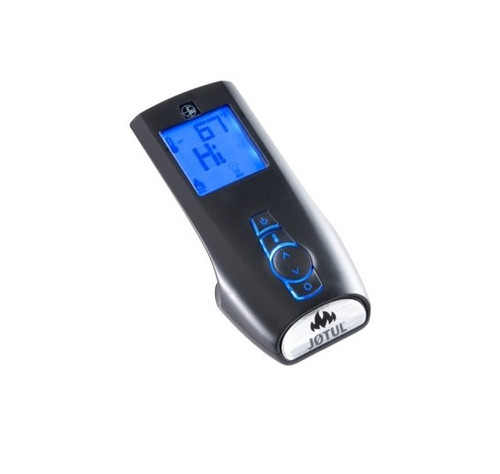